skip to main | skip to sidebar

Oregon To The Coast

Monday 8-2 day 88 62 miles 4345 total. Coburg to Salmonberry Park. Crossed the coastal range with the last big climb of the trip 6 miles of up to 6% grade, but a very nice ride. We are now firmly on the coastal side of Oregon. Salmonberry is located near the town of Alsea on the Alsea River among large moss covered trees. 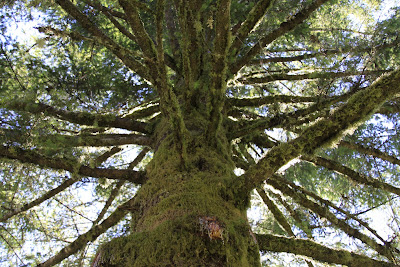 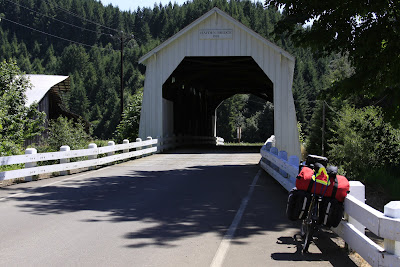 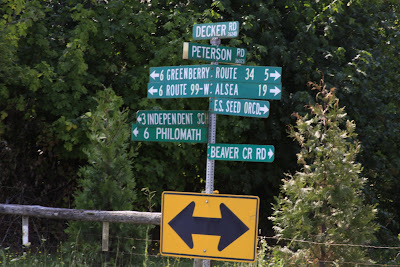 But which way to the coast?
Sunday 8-1 day 87 - 57 miles 4283 total. McKenzie Bridge to Coburg. A splendid ride mostly downhill with nice scenery. McKenzie river was on the left most of the way. There was some fog in the morning that did not hinder riding. Cold morning, but cool and sunny in the afternoon. Saw two eagles and two Osprey today and got good pictures of the Osprey. 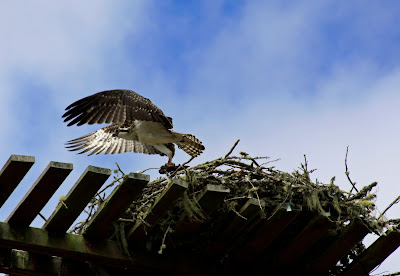 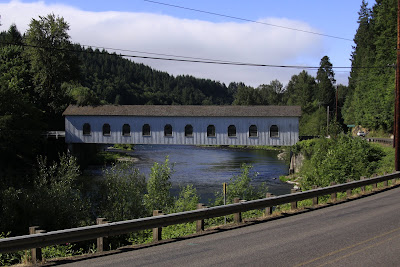 Covered bridge over the McKenzie River
Saturday 7-31 day 86 - 48 miles 4226 total. Sisters to McKenzie Bridge. Began the day with a 10 mile climb over McKenzie pass. This pass looked intimidating on the profile, but was pretty easy as passes go. Could it be by the end of the trip we're getting used to them? There was an observatory on the top of the pass that provided some spectacular view, especially of the lava flows. The day ended with a long (10 miles) downhill into the city of McKenzie Bridge through the lush tall treed Willamette National Forest. For all that are interested McKenzie Bridge, Pass and River are named after Donald McKenzie who is a cousin to the famous Canadian explorer Alexander McKenzie for whom the McKenzie river in Canada is named. 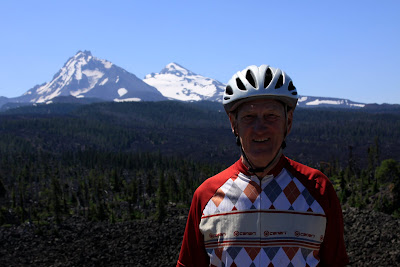 BetterBill with sisters
Friday 7-30 day 85 - 37 miles 4178 total miles. Prineville to Sisters. Very short day, some climbing, but otherwise a flat fast ride. Camped at Evered's Ranch. Beautiful view of The Sisters and Mt. Jefferson with a pond to swim in. Patty Evered was an excellent host on a ranch with a view. 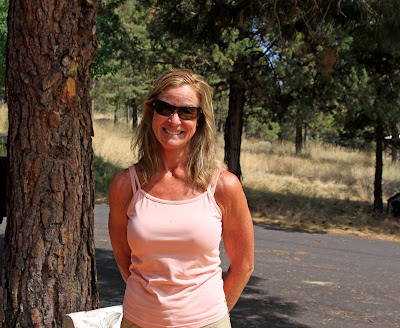 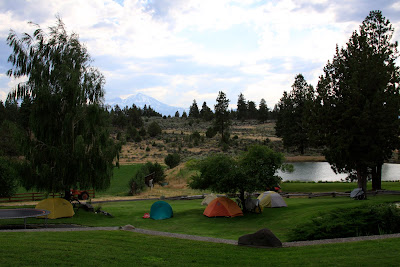 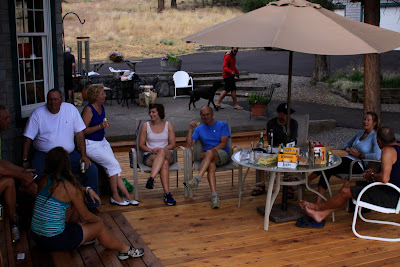 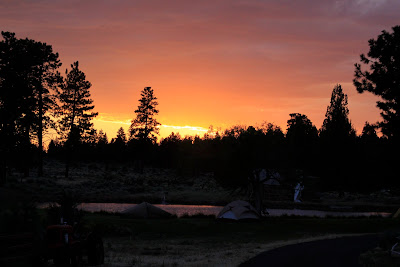 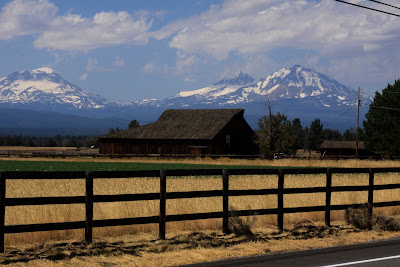 First view of Three Sisters
Thursday 7-29 day 84 - 49 miles 4141 total miles. Mitchell to Prineville. The day began with a long 10 mile climb, but it was all downhill from there and a short day at that. Found great ice cream at Tastee Treat in Prineville. New beer of the trip was Mirror Pond Pale Ale from Deshutes  Brewing Co. of Bend, Oregon. 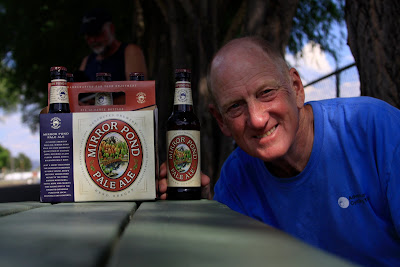 This one is pretty good! Quote of the day:
"You can only drink 30 or 40 glasses of beer a day no mater how rich you are." August Bush
Wednesday 7-28  day 83 - 86 miles - 4092 total. Prairie City to Mitchell. This was the longest ride of the trip and featured hills, rain, flat tire, and great scenery - all in all a wonderful day. Picture Gorge was beautiful and I got nice pictures of the fossil beds and overview. Stayed the night in the Historic Oregon Hotel. Very quaint, nice well kept and better than expected. The last big climb of the day topped out at ten miles from the hotel. The decent was so steep and long that I did not peddle one stroke from top to hotel and attained speeds of 48 mph without even tucking. Fantastic! 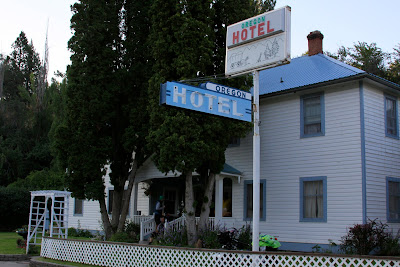 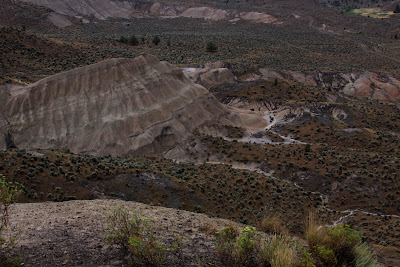 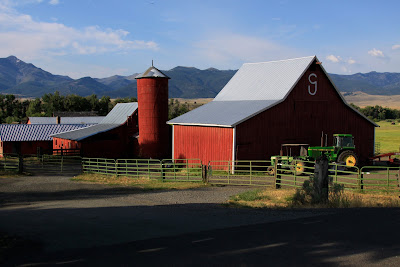 Oregon barn scene
Tuesday 7-27 day 82 - 68 miles - 4006 total miles. Bakers City to Prairie City. Today was much different than the past two days in Hell's Canyon. The ride featured three mountain passes that were not too bad and a lush forest with lots of trees. The Oxbow Restaurant and Saloon in Prairie City was a big hit with everyone ( focus on saloon). 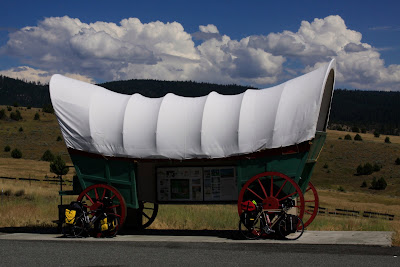 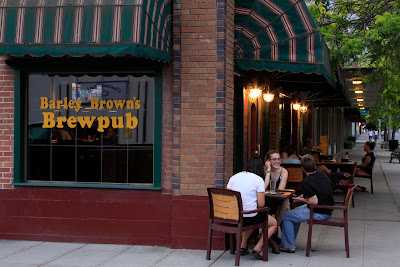 Excellent restaurant and Brewpub in Baker City where they say
"Beer: So much more than just a breakfast drink"! 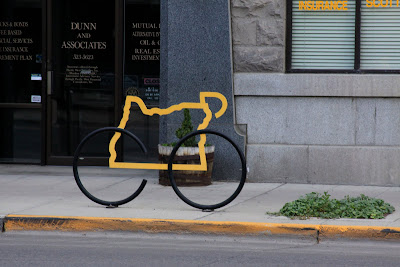 I have long had a dream of cycling across America, but I could never talk my boss into a three month vacation. April 2nd I will retire and May 4th I will begin a TransAm ride with Adventure Cycling Association. The ride begins in Williamsburg, VA travels through 10 states and 4305 miles later ends in Florence, OR. This blog is about this dream. Another passion of mine is photography. I will be traveling with my Canon 50D DSLR and an Olympus Stylus 790 SW camera. Between now and May 4th I will post information and pictures of my preparation for the ride itself. Then on the ride I will post pictures of people, places and landscapes from the road. This will be a pictorial documentery of my dream. I hope you will check back often and enjoy the dream with me.

"Twenty years from now you will be more disappointed by the things you didn't do than by the ones you did. So throw off the bowline, sail away from safe harbor. Catch the trade winds in your sail. Explore, Dream, Discover."

Visit my photo blog at:
http://www.betterbillsphotoblog.blogspot.com/

You may see more of my photography at:
http://www.betterbill.smugmug.com/

Check out my personal web page at:
http://www.betterbillsweb.com/

See where we're going, where we've been and where we're staying. You may want to join us for a day's ride.

TRANSAM PACKING LIST
See what I will be taking along with me on my bicycle trip across America. I think it is a pretty good list, but I am sure it will change some as final preparations are made.