skip to main | skip to sidebar

Sunday 7-25 day 80 - 54 miles 3938 total. Halfway to Bakers City. Another hot day in Hell's Canyon. Bike computers measure 110 degrees. This was not in the shade, but there was no shade. no water and lots of climbing. This was a tough day! 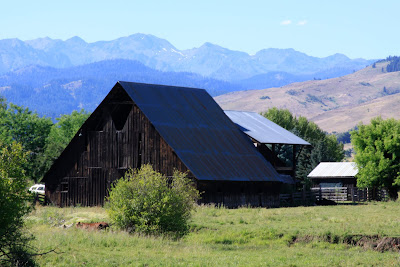 Nice photo of a barn, but this is not Hell's Canyon. There are no trees in Hell's Canyon.
Saturday 7-24 day 79 - 80 miles 3884 total. Council to Halfway Oregon. New state day today: OREGON the final state. As soon as we crossed the Snake River into Oregon the river was lined with Cherry trees limbs bowed with fat ripe cherries. There were also lots of Blackberry bushes, but those who picked them received flats from the thorns. Then we entered Hells Canyon. I'm sure it was named for the heat there - 103 at Scotties Station. Had a wonderful dinner that night at Mimi's Cafe in Halfway. I had a great Salmon Burger and shared a delicious bottle of Hell's Canyon Retriever Red wine with Ray and Michel. This might have been the best dinner of the trip, and in such an unexpected place. 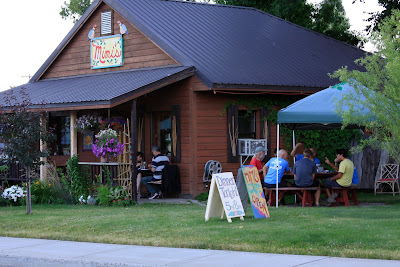 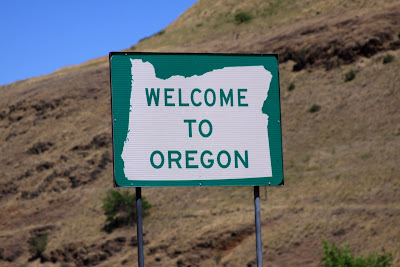 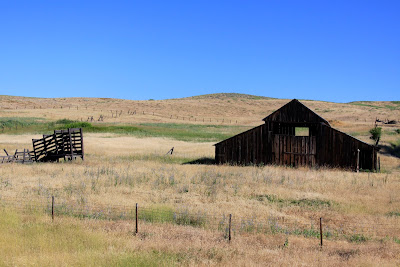 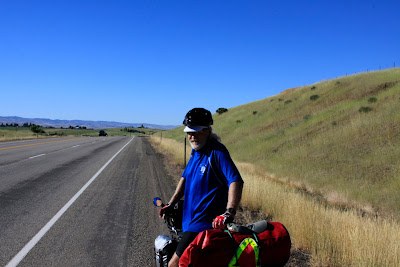 Jack at top of climb
Friday 7-23 day 78 - 62 miles 3804 total. Riggins to Council.  Another fine day on the bike with an easy climb in the morning, but a tougher climb to end the day. Followed the Little Salmon River most of the day. Camp was a nice RV park with maybe the best showers of the trip.

Thursday 7-22 day 77 - 53 miles 3742 total. Grangeville to Riggins. There was a tough climb up White Bird Hill to begin the day, but fun fast downhill with many switchbacks. Followed the Salmon river most of the way. Camped at a pretty campsite on the Salmon River in Riggins - the whitewater capitol of Idaho! 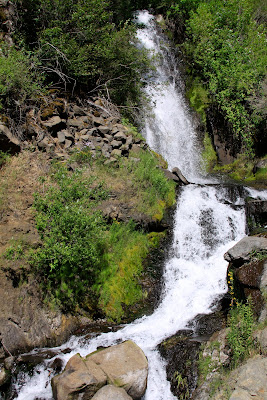 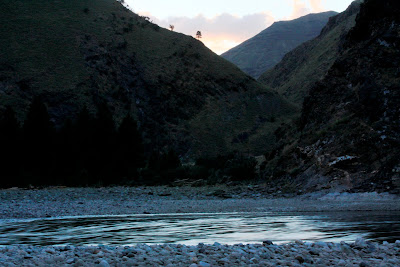 Sunset at Riggins camp with Salmon River in foreground.
Wednesday 7-21 day 76 - 50 miles 3689 total. Lowell to Grangeville. Today's ride was up the middle and south forks of the Clearwater River. Steep climb at the end of the day was not as bad as advertised. I had the best smoothie of the trip so far at Hanna's Closet and Espresso.

You may remember Randy and Meg who started the trip with us, but left us at Chester, IL. They are from Idaho and Meg found us here in Grangeville. She helped us shuttle groceries and had dinner with us. It was nice to see her again. 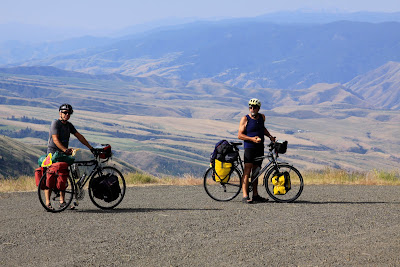 James and Mort at top of White Bird Hill 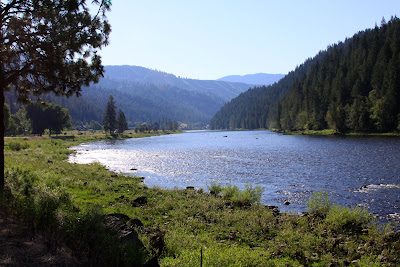 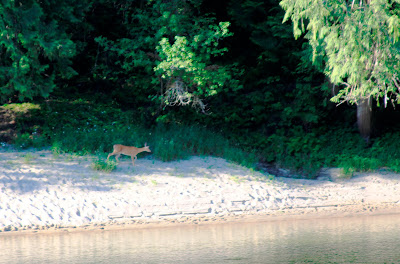 Tuesday 7-20 day 75 - 66 miles 3639 total. Lochsa Lodge to Lowell. Travel through the Selway and Bitterroot Wilderness and the Clearwater National Forest. Lots of history here. US Highway 12 from Lolo, MT, over Lolo Pass, to Lowell ID is the general path that Lewis & Clark took in 1804  on their Voyage Of Discovery. It is also the route that the Nes Perce Indians took on their failed attempt to flee the US Military in 1877. It was a very difficult trail at the time, but today it is a beautiful drive. Western Ceders reach to the clouds with Engleman Spruce, Lodgepole Pines and other pines joining in. The forest floor is covered with ferns and other growth. To the left is the everpresent Lochsa River with many streams and waterfalls flowing in from the right. The ride through it was 65 miles downhill with cool temperatures. It was truely one of the best days of the trip. This is a pretty and historic highway with little traffic. You should plan to drive (or bike) it someday. 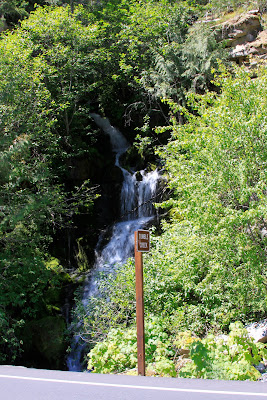 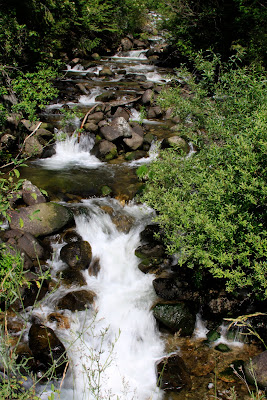 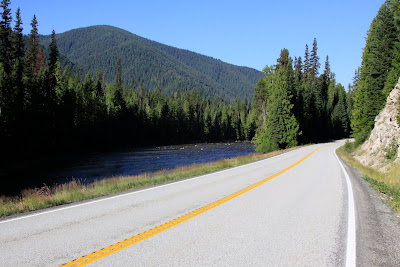 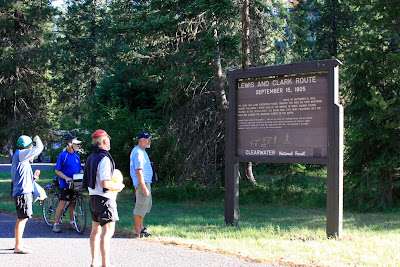 Robert, Jack, Olaf and Mort viewing Lewis and Clark Information
Monday 7-19 day 74 - 57 miles 3573 total. Missoula to Lochsa Lodge, Idaho. Traveled the Lolo Trail over Lolo Pass (5225') into Idaho. Idaho turns into a lush dense forested area wilderness. In addition to a new state day we also passed into Pacific time. Even with the Lolo Pass climb, it was a very enjoyable ride. Rod, Ginny, and Gregg from Adventure Cycling Association came down to Lochsa Lodge and put on a BBQ for us that evening. 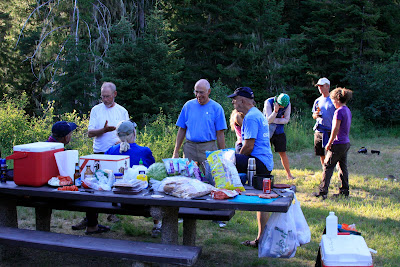 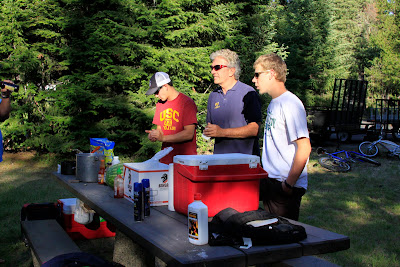 Rod and helpers from ACA 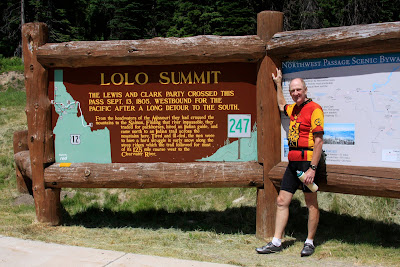 BetterBill at summit of Lolo Pass 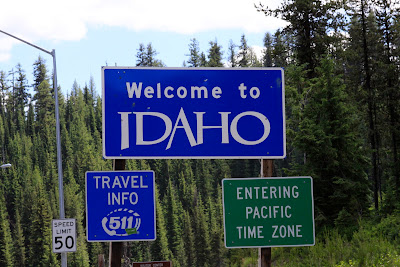 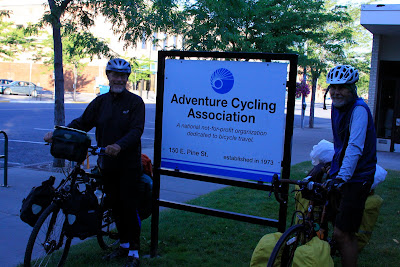 Olaf and Robert at ACA headquarters in Missoula, MT
Posted by betterbill at 12:17 PM

I have long had a dream of cycling across America, but I could never talk my boss into a three month vacation. April 2nd I will retire and May 4th I will begin a TransAm ride with Adventure Cycling Association. The ride begins in Williamsburg, VA travels through 10 states and 4305 miles later ends in Florence, OR. This blog is about this dream. Another passion of mine is photography. I will be traveling with my Canon 50D DSLR and an Olympus Stylus 790 SW camera. Between now and May 4th I will post information and pictures of my preparation for the ride itself. Then on the ride I will post pictures of people, places and landscapes from the road. This will be a pictorial documentery of my dream. I hope you will check back often and enjoy the dream with me.

"Twenty years from now you will be more disappointed by the things you didn't do than by the ones you did. So throw off the bowline, sail away from safe harbor. Catch the trade winds in your sail. Explore, Dream, Discover."

Visit my photo blog at:
http://www.betterbillsphotoblog.blogspot.com/

You may see more of my photography at:
http://www.betterbill.smugmug.com/

Check out my personal web page at:
http://www.betterbillsweb.com/

See where we're going, where we've been and where we're staying. You may want to join us for a day's ride.

TRANSAM PACKING LIST
See what I will be taking along with me on my bicycle trip across America. I think it is a pretty good list, but I am sure it will change some as final preparations are made.